Drag races never fail to impress us, especially if we see some classic cars on it being modified to keep in touch with the modern super cars. In this case we are going to take a look at two German classics, the VW Golf I and the VW Golf II. These beauties serviced the people worldwide with dignity and pride. Hence these guys decided to modify them and make them as powerful as they can get. The 16Vampir Golf Mk1 has a 4motion 2.0L 16V turbo engine and is able to make as much as 1000+ HP, whereas on the other side we have the Golf MK2 with 4motion VR6 turbo engine with 900+ HP. 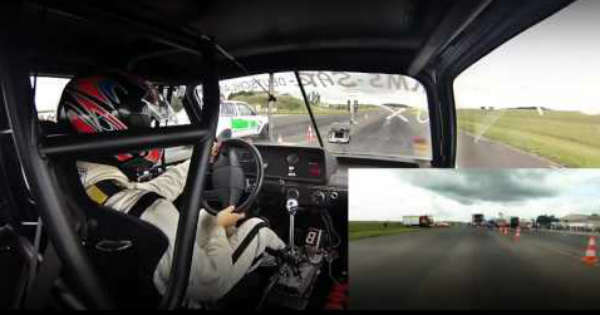 Over the years we have seen utterly amazing and unforgettable drag races between some of the best and fastest cars ever made. Even before the race we know that this is going to be a super exciting race. When everything looks ready, both of the VW Golf can be seen rushing across the track but the 16Vampir Golf MK1 seems to be holding the lead. And so it happened, the MK1 won the race with magnificent 8,7 seconds and max speed of 281 km/h, whereas the MK2 finished the race in 9,3 seconds with max speed of 249 km/h.

But if you thought that this was it, you were wrong and the fun does not stop here. They go head to head on the drag track for couple more times but you have to check out the full video for it!