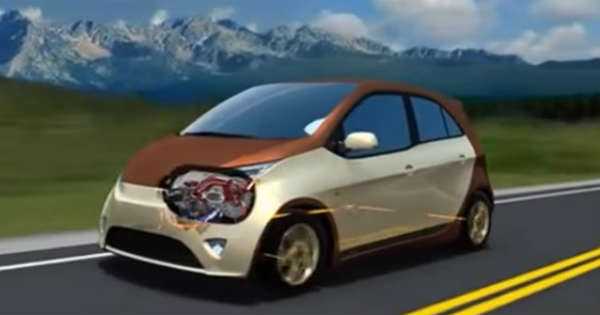 The Yo Mobile car was an anticipated series of hybrid electric vehicles that were planned to go into manufacturing by the Russian car manufacturer – Yo-auto. This ambitious company was a collaboration between the ONEXIM investment group and the SKD truck manufacturer Yarovit. However, this business venture stumbled upon a few serious problems that resulted in selling the company to the government for a symbolic 1 euro. However, as of 2017, there`s still no production vehicles produced. The engine that should power this hybrid vehicle is a very peculiar rotary vane engine. In the video below you can see a very neat animation that gives us a full rundown on how this engine exactly works. However, it doesn`t exactly prove that it can work with full efficiency.

The engine of this hybrid car is made to burn both natural gas and gasoline. However, we are more intrigued by the electric generator which is supposed to work in a very interesting way. The electric generator feeds its power right into the vehicle`s two electric motors that are located at the rear. This is pretty different from parallel hybrid vehicles like the Prius for example. There`s another super capacitor that should deliver a pretty small but very powerful energy buffer.

However, the rotary vane engine which its concept is nicely animated, in theory should efficiently move the pistons in a circle instead of linearly. The fuel economy of this car was planned to be 67 mph with a 680 miles range. The top speed was expected to be 80 mph. Nevertheless, this car with its ambitious rotary vane engine was never tested.

At last, check out the most epic names given on engines when Detroit ruled the automotive industry!