The internet is a place flooded with ideas and unique invention; people share their ideas and make awesome things from everyday objects. Moreover, everyone has the freedom to make and say what they mean or what, no matter whether you are going to like that or no. Hereby such amazing videos appear every day and offer us inspiration and amusement. In this video we take a look at a really unique invention that, at the same time, looks absolutely exclusive. 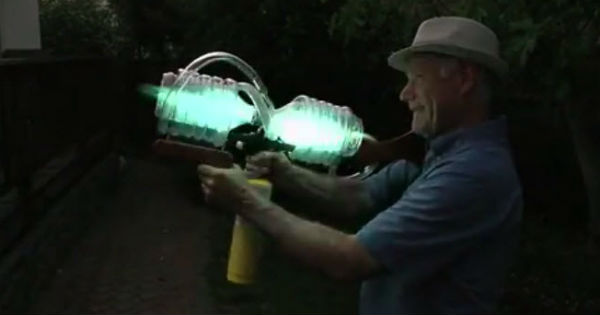 He made this awesome shooter out of a propane torch and some hoses. But it is the inspiration that governs these brilliant inventions. This elderly man demonstrates what it looks like to shoot with it at day and night. All we can say is that it looks even better in the dark.

He uses a different type of gas which has a lower point of ignition. This means that the ball is going to travel further in the tubing without igniting, thus it is going to shoot further as well. But it is due to the color which makes this unique invention so cool. While the ball travels through the tubes, a green color follows it, which makes a pretty unusual thing to see.

Moreover, the tubes are built in such a way that it would have to rotate couple of times before actually being fired. You can aim at bottles or other object and have fun with it, but be careful and never point it to any human. Do you like this awesome invention?