Plane spotters positioned themselves for the best view they can get. However, they probably didn`t anticipate such a close shave! Many plane onlookers who were watching an RAF presentation found themselves in a very extreme situation. Check this Typhoon Fighter Plane & Bombers in action! 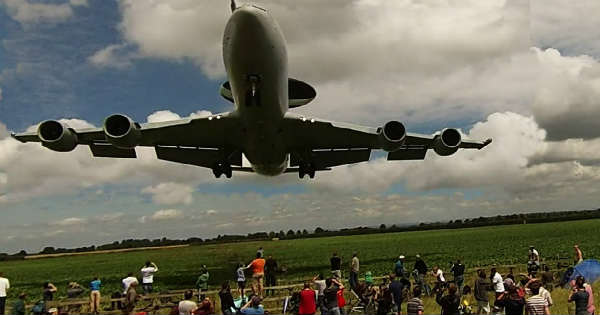 They were forced to duck and run for cover when a gigantic Typhoon fighter plane soared only a couple of feet above them! The group of plane enthusiasts set up camp right under the plane`s landing path. The footage below shows them cheering the multi-million aircraft as it prepares to land, but they soon realize it`s a tad too close for anyone`s comfort.

There were even some adrenaline addicts who went as far as climbing on ladders in order to get a better view through the perimeter fence into the showground. They were in for quite a view indeed when the Typhoon fighter plane literally brushed past the fence! Other onlookers ran to save their lives and dropped for cover in terror as jet wash blasted from the aircraft. This incident occurred at the Waddington Air Show. Check out the video below and give us your thoughts. Who do you think it`s to blame for this incident? The organization behind the event or the onlookers?

Finally, click here to read more about the Eurofighter Typhoon!