The 1967 Ford Mustang Convertible was potentially one of Ford`s greatest styling exercises ever. It stayed true to the original that was introduced 3 years earlier, but it was still unique in its right with its deeply sculptured lines, a three-element taillamps, a wider track, neatly simulated finned sidescoops, and awesome engineering refinements both inside and out. However, despite Mustang`s success from `64 to `66, this one couldn`t really compete with the Firebird, the Camaro and a redesigned Barracuda. 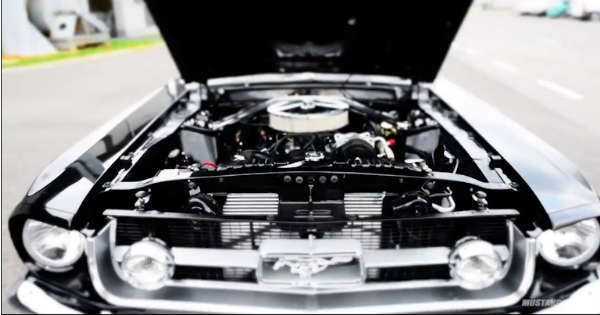 Nevertheless, we think it stood all tests of time and it deserves its own place in American automotive history. In this video, one unbeatable workshop decided to fully restore one awesome 1967 Ford Mustang to its former glory. They do their thing with great style as well. We are talking about a time-lapse restoration video of one awesome 1967 Ford Mustang Convertible that`s consisted of 10.000 photos! This unbeatable workshop also invested more than 1200 hours of work into restoring this classic muscle car to its former glory. The entire restoration lasted six months and the entire work is processed into a few minute time-lapse video.

The video production is done by Pixelhood Digital Art. Watching these guys putting that engine together with all the painting/masking and great attention to detail is a real feast for every car lover`s eyes. You might end up watching this video 5 times in a row. Another thing worth mentioning is that this car shop is actually located in Europe. Having said this, it`s great to see Europeans nourishing American classics.

Plus, if you want to watch how a Hot Wheels car is being restored, click here!

Now this is a restoration! 😍😍