We are all used to watching videos of some mighty cars being completely restored and modified in any way possible, but even though that is a common occurrence, they never fail to impress us. So if you think that a four wheel super car is as good as it can get in terms of speed and power, after watching the following video you are going to think twice. We take a look at this incredible three wheel beast that takes the words race, speed and fun to a whole new level of awesomeness. Namely, we see footage from what seems like a race in the city but then all of a sudden, something incredible happens. 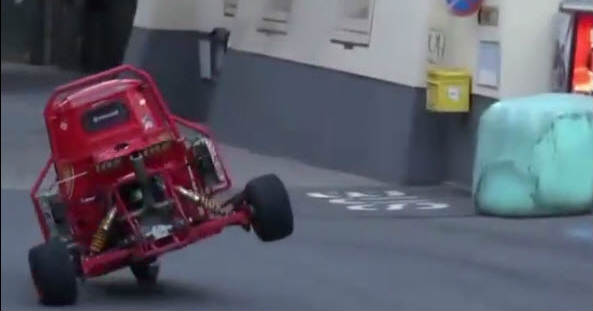 Just as the driver in the white car made the sharp turn, behind him appeared the three wheel beast. No one would expect from such small car to be super powerful, but do not be fooled. This little thing has tons of power. The big engine is mounted on the back and it is capable of doing everything that your normal car can, or even more.

It can make sharp turns, it can drift, it can drive at high speed but most fascinating of all is the fact that this three wheel beast can ride just on two wheels. It stops at the turn for couple of seconds to show off its abilities which makes the crowd go wild. The video is fairly short and we would all love to see more from this awesome car!