What we have here is a great looking, futuristic and unique motorcycle, designed, built and constructed by Mark Parker from the Parker Brothers Choppers. The name is TRON BIKE and is this the look of the yet to be future bikes? This is a guy who really knows how to build things. And it should not be a surprise, taking into account that along with his brother, they are doing it ever since their childhood – bikes, cars, motorcycles – so somewhere in 2010 they started a business. And as Mark explains, the weird and unique stuff is what really inspires them and makes them more creative. It`s when they decided to build something that could picture the future bikes! 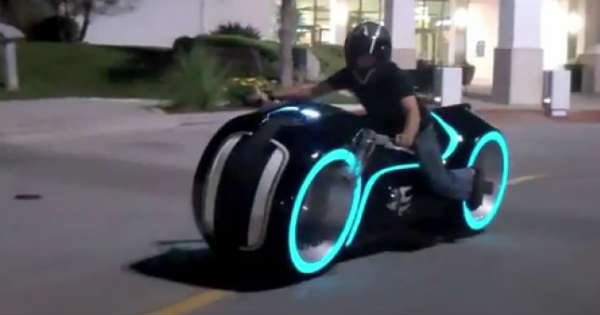 The Tron Bike that you will see in this video was inspired by the latest Batman film. Before that, it was mainly just regular bikes, pretty much just like everybody else were making.

The bike is constructed using steel frames and fiberglass for the body work and it is powered by a petrol engine (there is a version with electric version as well). Top speed about 130mph and  it goes 0-60 in 3.4 seconds. When you take it this way, the TRON BIKE might be the resemblance of the future bikes! Who knows anyway?
Watching the previews from the upcoming Bat-movie, they realized that real bikes were never used in it, only CGIs. The reason was that nobody could have built something like that. And as you can guess, it was all they needed. It was a challenge that made them sit down and start making sketches on paper and after a certain period of time, things started happening for real.