The massive progress that the car industry has been undergoing these couple of past decades has enables each individual to be able to feel the real speed and power for much lower price. But not only cars are made better and faster. Hereby we take a look at a very special vehicle i.e. as it is claimed, the fastest Go-Kart that has ever been made. They also claim that this little monster is faster than even the fastest car on Earth. But how can this possible? 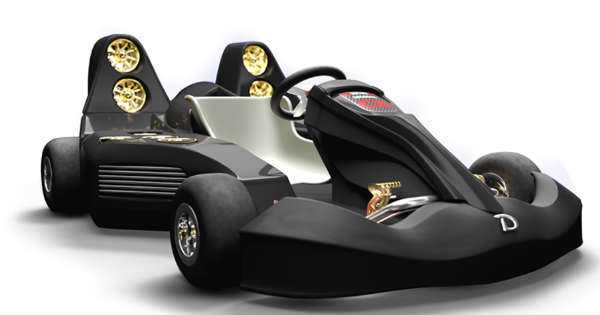 Well, the world`s fastest Go-Kart is known as the C5 Blast Go-Kart Ultimate was made by a Canadian company by the name of Daymak. This company is also known for building awesome ATVs, electric bikes and scooters that are further on tested in Toronto. It is claimed that the C5 Blast is capable of going from 0 to 60 in staggering 1.5 seconds. This means that it is twice as fast as the extreme electric beauty, the Tesla Model S. It is powered by a 10kW electric motor which is further on supplied by 2,400 WH lithium-ion batteries.

Four electrical fan motors that give this 200kg Go-Kart a 60kg of forwarding thrust. They claim that speed is going to be no issue. You could choose from two different models, the cheaper one costing $9,999, whereas the one we want costs whooping $59,999. This is as good as the Go-Kart technology can get. Even though it is very expensive, it is worth every dollar hence you purchase the fastest vehicle in the world!

Finally, if you are in for a small history lesson that combines NASCAR and go-karts, click here!