The major progress in the car industry has enabled us to see different concepts of engines and car parts. But even though there are many different ones, the basic concept of a piston engine has remained the same, and the difference was seen in just their power and size. There is the V6, V8, V10 and even a V12 piston engine. Even though there are also some more extreme ones, these seem to be the most common ones. But, there is also a rotary engine that is considered as the black sheep in the business. 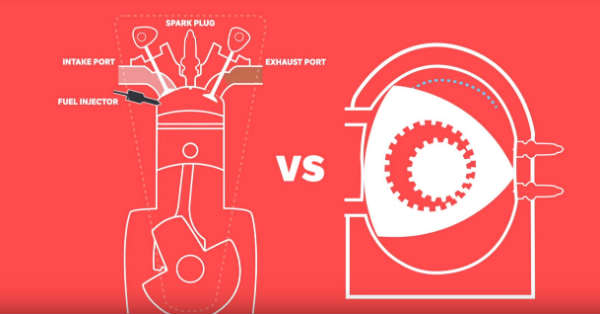 In order for you to easily understand the differences between these two engines, take a look at this awesome video and the perfect animation. For those of you do not know, there is also a simple tutorial on how a normal piston engine works. The diesel engine seems to work just the same, the only difference being that there is no spark plug to ignite the mixture, instead it compresses and heats the fuel-air mixture much more rapidly.

But the rotary engine is something different, even though it has the same four stage basis. There are no cylinders or pistons; instead, there is just a small rotor that does the entire job. People often refer to this rotor as a Doritos, due to the shape. There are five common components you would find in a rotary engine, such as a front plate, rotor housing, the rotor itself, rear plate and an eccentric shaft.

Check out the full video if you want to know more about these engines!