If you are in love with the speed and a SUV, we would guess that the Tesla Model X P100D is as refined as you could get. 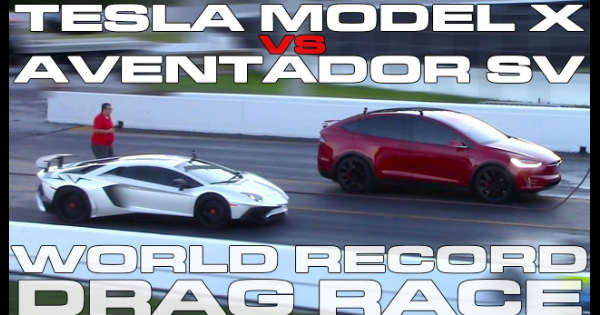 This awesome beast was first released last year and it has been a great success on the market. In the following video we take a look at such Tesla Model X P100D racing against a Lamborghini Aventador SV. Namely, the owner of the Model X got a call from another man and asked him if he would like to race against him on the drag track. He was very pleased to accept it and this is how this whole race took place. The Model X has 588 HP and its price is at around $165,000. Anyone would guess that it would not have any chance against the mighty 750 HP Aventador.

They approached their spots at the track and when the lights turned green the cars accelerated right away. Even at the start the Tesla Model X P100D was in front and as the race was closing by the Aventador managed to catch up with the Tesla but it just was not enough. The Model X won by just .05 seconds. But this race was something special. The Tesla set up a new record for the quickest SUV!

Another race is held between the Tesla Model S P100D and the same Lamborghini. This time the Aventador did not have any problems and won the race by .15 seconds. Check the video for extra footage!

At last, watch how this policeman got embarrassed by the hidden features of the Tesla car.