Is the Tesla Model S P100D worth the massive premium over a cheap and small electric vehicle? This video made by the YouTube channel Carwow aims to find out exactly that. The Model S is considerably roomier and faster. Having said this, it`s way more luxurious than this entry-level EV like the Zoe. However, the Model S is also by far the more expensive. That is exactly what makes this showdown particularly interesting. However, is it really worth the price? This video aims to find out through several tests like a brake test, a range test and the ultimate drag race. 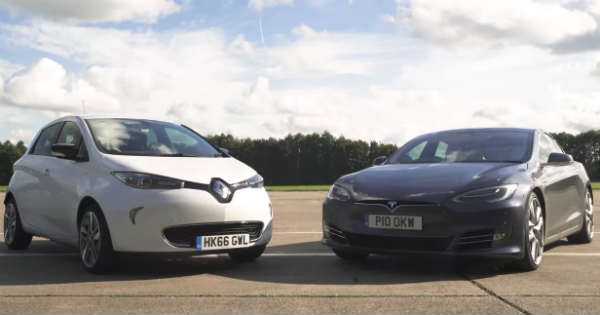 The Renault Zoe has 90HP while the Model S has 611HP! Yeah, it might sound ridiculous putting these two cars on a test, but why not? The drag race was performed on a ¼ mile and the Tesla Model S P100D managed to put a time of 11 seconds .The way cheaper and less powerful Renault Zoe on the other hand – 18 seconds. Up next comes the range test which is filled with anxiety. The Tesla has 99 miles left while the Zoe has 44 miles left.

The tesla used 6 miles of range in 3 miles driving while the Zoe has done 3 miles on 3 miles of driving and they were going the same speed. The Zoe managed to score in this one. However, how will it fare in the next test which is breaking performance? Both cars break heavily on 70 mph. The Tesla weighs 2.1 tons while the Zoe weighs 1.5 tons. The Zoe managed to win by an extremely small margin in this one as well. In the next deciding test which is braking by lifting the Tesla wins outscoring the Zoe by 3-2.

At last, follow this link to witness the power of the record-braking electric dragster!