Cars come in all shapes and sizes and they all have different uses. However, nothing can get more exciting that taking a look at ridiculously fast drag racing cars. They are the ones that make our blood to boil and our heart to beat fast. Lucky enough, we have a really exciting duel for you to take a look at. Namely, on the drag strip two beasts will be going one against the other in search for glory. On one end we have the Tesla Model S P100D, the breakthrough in the car industry. On the other end we have something utterly special, a truly unique Dodge Demon. This Dodge Challenger ST has been upgraded to the extreme limit, thus making it one of the most powerful such cars to ever exist. Brace yourself for what is following! 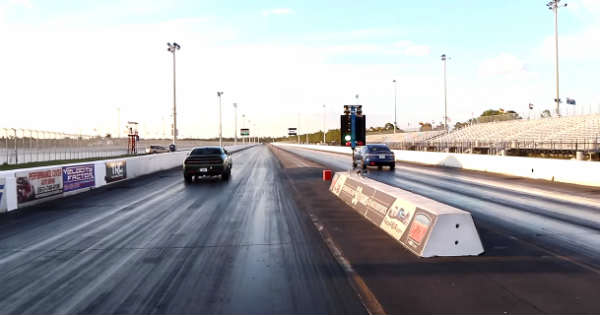 Before we take a look at the race, let us introduce to the numbers. We are all familiar with the power of the Tesla Model S P100D, but what about the Dodge Demon? Well, this furious beast has massive 840HP, enough to put every car behind it. Moreover, the Demon was equipped with a brand new set of tires with ultimate grip. This meant that nothing could stand on its way. And couple of minutes later the race began! Both of the cars were off to a furious start but as everyone predicted, the Dodge Demon won the race. It was a tight one and it made everyone there to say WOW, but there could be only one winner. In this video you can also see some extra content from the event that took place just recently. Take your time and check out every second carefully for details!

Before you leave, make sure to take a look at this absolutely unique Tesla!