A teenager careered through Bolton at 80mph in a stolen Audi S3. The teenager that goes by the name of Jordan Braithwaite stole the car in Hale. The police spotted the stolen car on the highway at Kearsley roundabout. The officers` solution to stop the car was using a stinger. However, only one tire was deflated and the police had to continue the high-speed pursuit for six minutes more through the area. After entire 6 minutes of intense high-speed pursuit, the teenage driver was finally apprehended. The Bolton Crown Court sentenced him to fourteen months in detention. 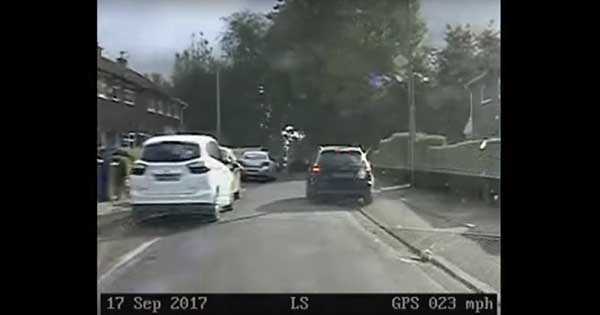 The teenager admitted to driving while banned, dangerous driving, having no insurance and stealing a vehicle. The recorder Andrew Nuttal stated that it was a miracle there were no casualties. After seeing the intense footage, we totally agree with the recorded. In fact, we think this is a very dangerous piece of driving where police officers risked their own lives trying to stop him. According to the prosecutor, Simon Nichol, stated that the stolen Audi S3 was gained during a burglary that occurred in Hale.

The teenager can be seen driving on opposite lanes and ignoring red traffic lights. He was finally arrested when he crashed into railings in Coniston Grove. The teenager`s lawyer said that Braithwate wasn`t involved in stealing the car. However, he agreed to move it to a designated location for a $70 payment. Braithwate is a forklift driver who lives with his girlfriend and their 20-month-old kid. Braithwaite stated that he`s embarrassed and ashamed.

If you are a parent, take this advice if your teenage heir steals from you!