There have been some absolutely amazing and unbelievable stories that we have heard over the last couple of years, but the one you are going to see now surely is unique. Whenever a car is stolen, the police are either going to find it really fast or it is going to be years or years since the owner might see it once again. To prove that this theory is actually true, we take a look at this stolen Porsche 924 that was stolen back in 1991 and was recently found rusting away in the woods, flipped over. 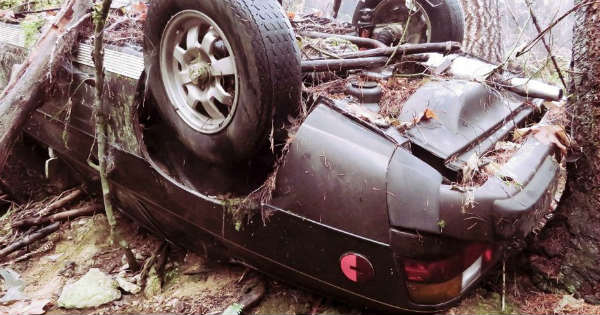 Yes, this amazing machine was stolen on January 20, 1991 from a parking lot near a movie theater somewhere in Medford, Oregon. The owner of the stolen Porsche 924 never heard of the car again, until it was found again by a man who was walking his dog in the woods near the Crater Lake.

The car was seen being flipped over in a steep cliff and it seems like it has been years when this accident took place. The police are currently working on the case and what might have happened to car years ago, but it seems that finding the exact reason is going to be a problem. No evidence was found nearby, even though they found some bones, it eventually turned out that they were from a deer.

What do you think about this amazing story and the way the car finally found its owner?