We are all humans and we tend to brag about our possessions in many situations, more specifically, if we own an extremely expensive and powerful car. But, this has proven over the years that it is the wrong approach hence in most of the times, the one who was the loudest ended up with nothing. Hereby, we take a video from one of our favorite YouTube channels, Vehicle Virgins, and a race between his 2015 Lamborghini Huracan versus the stock McLaren 720S. 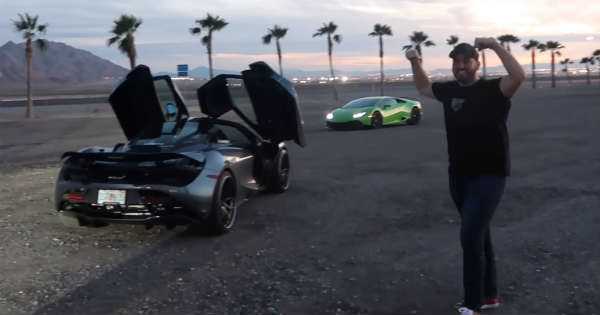 Everyone was super excited about the race, but what do the numbers have say when it comes to these two cars? Well, the green Huracan has a 5.2L V10 engine with VF supercharger kit and it makes whooping 805 HP. The stock McLaren has a 4.0L twin turbocharged V8 engine, and according to the carmaker, it is supposed to make little bit less than 720 HP. Before the race between the Huracan and the 720S, we take a look at a warm up race between two a bit different McLarens.

Then, just when everything seems ready and the people are all on their places, it is time for the fun to begin. There are multiple cameras mounted on each car to capture the action as good as it can get. Then, on the count of 1, both cars are off to a decent start, but the stock McLaren soon after simply rushes next to the Huracan, grabbing the win without any problems. What do you think, is the 720S actually more powerful?

At last, follow this link to learn more about the McLaren 720S!