As you probably already know, those Soviets had some insane Heavy ISU 152 Tank machinery in their rolling stock back in the early 1940`s. You know – the World War II period! Most of us were not even born then, but I remember Grandpa saying: “Oh, those damn Ivans (that`s how he called them since Ivan was a very common Russian name) had some bad weapons operating through Europe! 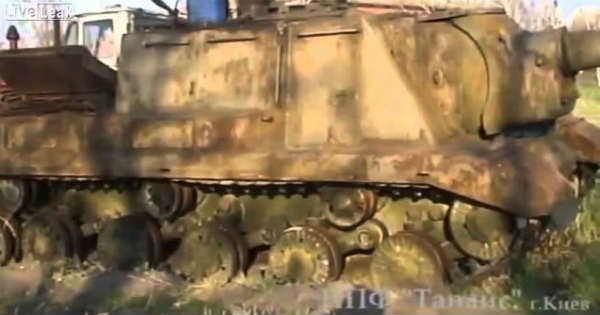 Of course, by weapons, he meant tanks – Heavy Tank Rolling Stock! Who knows, maybe one of the tanks he referred to was exactly the ISU 152 Tank!

Anyhow, The ISU 152 Tank was mainly used by the Soviet Army for military interventions during WW2. The original nickname this heavy tank has is Zverboy, translated to English as The Beast Killer! And a killer it was, indeed. However, it was being used after the war as well. Unfortunately, it got lost in a Ukrainian village as it is now found after 65 years! The ISU 152 Tank was used by many countries, mostly by the Eastern sphere, such as Poland, North Korea, Romania, but also by Finland, Hungary and others. Anyway, let`s hear the start up of the beast killer – ISU 152 Tank!