First we thoughts it’s an aircraft trying to do an emergency landing on the water. However, it is a Russian Amphibious Aircraft BERIEV B-200 that lands on water and then immediately takes off from water in couple of seconds. This aircraft is produced by the Beriev Aircraft Company  and it’s used for fire fighting, maritime patrol, search and rescue operations, passenger transportation and cargo. 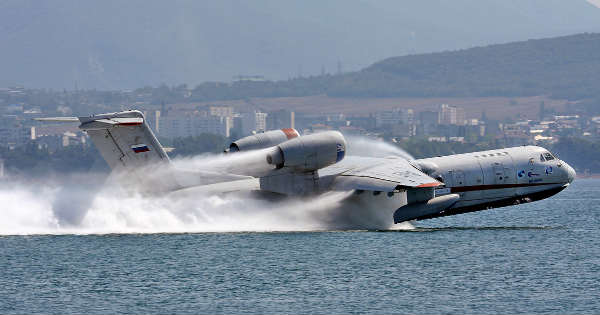 However this huge amphibious plane was designed to be a fire fighter with a capacity of 12,000 liters (3,170 gallons of water). Anyway it can still take 72 passengers on board. BERIEV BE-200 participated in several international airplane exhibitions, in order to demonstrate its amazing capabilities to all potential customers in Europe. They have made several demonstration flights made from water and from land.

Since 2010 the production line of this aircraft was moved at the assembly line for amphibian aircraft & flying boats in Irkutsk, Siberia. Since than the BERIEV BE-200 is produced there.

The landing and taking of from water you are watching at the video is near the “central beach” at the Rostov region in Russia. The performance of this thing is pretty impressive, respect for the pilot’s skills as well. Please share this post with your friends on Facebook.