During the Bulls festival in Spain, a rampaging bull smashed into a 4WD and lifted it high in the air. After doing so, the fiery bull caused oil to pour out of the car`s engine. However, the scariest thing about this incident is that a terrified family occupied the vehicle. You can also see them taking cover as the fiery beast charges with full force. After it stopped goring the vehicle, it decided to charge at revelers who were taking part in the infamous festival. This video doesn`t show the moment when the bull starts to charge at the people who took park in the festival, but you can see the entire incident with the car. 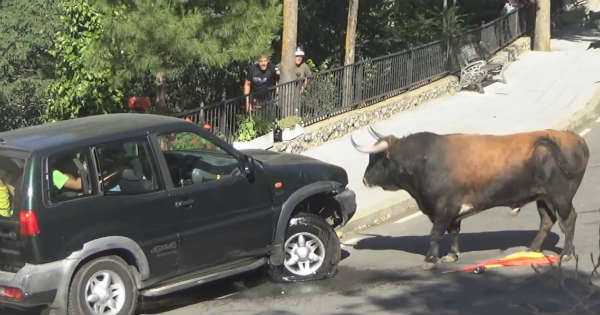 You can see the hulking bull charging towards the SUV. The raging bull began its first attack on the SUV by planting its horns on the car. The beast lodged its horns above one of the front wheels of the car and then used its powerful strength to lift the vehicle off the ground. With its relentless bovine, the bull stabbed the vehicle so deeply that oil from the engine started flushing out.

Now comes the part that you can`t see in the video. Instead of catching its breath after destroying the SUV, the bull decided to start charging towards many revelers who decided to taunt the angry beast to chase them instead. This bulls festival was held in Guadalajara, Spain, but these types of festivals are pretty common not only in Spain but in Portugal as well.

At last, follow this link to see more animals vs vehicles!