Watching videos of other peoples` talents are always fun and interesting as we get the chance for the first time something interesting and new, and maybe something that would inspire us such as this video of this professional rally driver who plays Dirt. 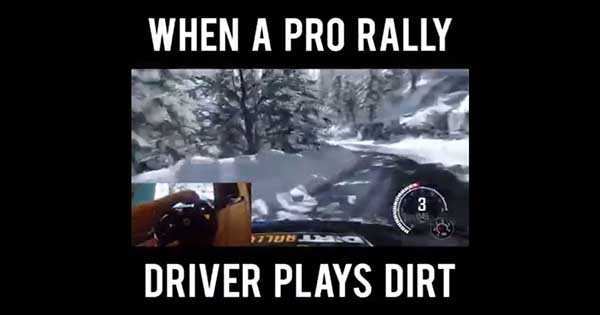 If you thought that you cannot imply your real-life talent into the virtual world, such as computer games, you were most certainly wrong. We all used to play racing games when we were young, and most of us even play such games to this day. At the beginning we were not good at them but as time flew, we got better and better. But it seems that literary no one can get any better at playing Dirt than this professional rally driver and his marvelous talent.

We see the video shot from two cameras, one being the screen itself and the other one being Point Of View camera mounted on his head. We see the steering wheel he is holding, as well as how perfectly he handles it. He goes through the whole 6-minute race without even the slightest mistake, thus probably making a record-breaking time, though we do not have any information about that. The setting of the race is snowy and in the mountain, which is one of the most circumstances to race, but it was a piece of cake for the professional rally driver. Anyways, racing in a game is much, much easier than racing in real life. What do you think, can anyone beat his time?

That`s not the only professional sportsmen that enjoys video games!