The past week has been horrifying for the people of the US, especially those living on the east coast due to the devastating hurricanes that caused millions and millions dollars of damage, but this Pagani Zonda HP Barchetta owner decided that his super-expensive car should be taken good care off. 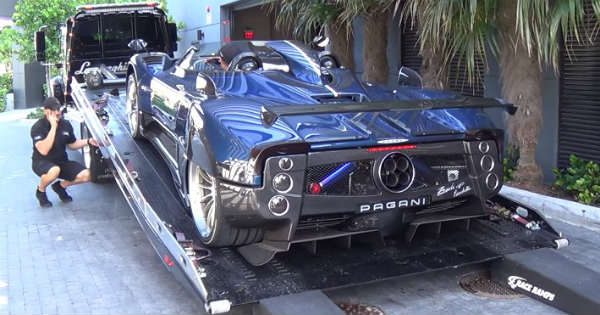 Porsche announced that car owners could safely store and keep their cars inside the Porsche Tower before the hurricanes hit. This was the perfect opportunity for some of the most expensive cars out there to be seen together at one place. Namely, the Pagani Zonda HP Barchetta was delivered by Pagani Miami to the Porsche Tower in which they did their job and took great care of the car. They slowly and carefully drove the car inside the building and prepared it for storage.

This $15 million beast was lifted up and stored all the way up on the 58th floor penthouse in which some of the most expensive cars ever made were in. Though we do not get the chance to take a look at the penthouse, we see what the Pagani Zonda HP Barchetta looks like on the inside, just before it was parked. And this beast looks absolutely stunning. The blue color scheme combination along with the chrome accessories and parts, make this car look that fabulous.

Many supercars can be found at the 58th floor and we just all hope that it all went well and none of the cars was damaged or even scratched during the devastating hurricane!

For some interesting facts about the Porsche Tower, check out this article.