Getting angry over a loud car is surely not the reason or explanation why you should throw a rock at it and break its windshield but the people in this compilation get angry and some even destroy these super expensive cars. 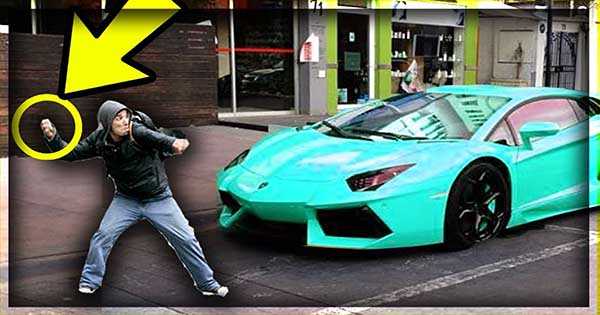 After watching the video, you be the judge whether you are going to justify the behavior of these people. In the first video we see what happens when an angry man confronts a loud car and its owner. They started arguing that it was very loud and that they did not have to do it just for fun hence there are people who live in the building nearby. Owning any of these super expensive cars does not have to mean that everyone is going to like you as we take a look at a video in which a rock is thrown onto a yellow Ferrari.

Cyclists can get angry over expensive car owners too! Further down in the compilation we see a cyclist driving in the middle of the road and when he gets warned by a loud Lamborghini behind him, he intentionally continues to drive slowly. After awhile, the Lamborghini finally manages to take over the cyclist without causing any trouble. Yet again we take a look a video in which an angry man throws a rock at a Lamborghini this time. No matter what, you should never do that as you might endanger someone else`s life. What do you think; would you justify these people`s behavior and anger?

At last, check out the most expensive car collections in the world!