According to car journalist and YouTuber Doug DeMuro, the new 2017 Tesla Model 3 is the coolest vehicle released this year. In this video, he gives a thorough review of the car`s features and quirks. For the purpose of this review, he borrowed a Tesla Model 3 from a viewer of his in California. First of all, Doug DeMuro is not really an avid Tesla fan so with that mind, he`s not biased at all. Regardless whether you hate or like Tesla, you got to admit that this car is a real phenomenon. People were literally sleeping in front of Tesla dealerships like waiting for a new iPhone. When have you seen people sleeping in front of something just to get a car? 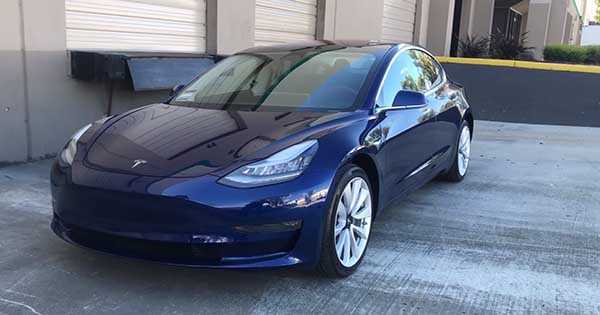 You can`t see people sleeping in front of Toyota dealerships to get the new Highlander for example. The new 2017 Tesla Model 3 is packed with cool, high-tech, exciting and weird stuff. For example, you can find only one air vent at the front. That vent is gigantic and it spans a full dashboard`s length. The two wheels found on the steering can move in all four directions.

The great part about them is that you can configure what to control with them. For example, turning up the volume, adjust the mirrors or your steering wheel`s position, amazing stuff. However, how does it perform when driving? Well, the car is pretty fast from a stop. It goes from 0-60 in just 5.1 seconds which is pretty solid for a Tesla. However, the most exciting thing is the midrange power. The new Tesla Model 3 is staggeringly fast from 30-40 mph.

Tesla can also be a real beast on the dragstrip! Watch as this one sends a Cat to Hell!