Coming up with your own inventions and always finding out the funniest way to do is what we should all try and complete, such as this mower engine that found itself a completely new use. It takes just little bit of inspiration and labor to make something utterly amazing, something that the world has not seen before. Even though we have previously come across some absolutely amazing things that people have done with a mower engine, this next video puts a shade to all of those and is a complete game changer. 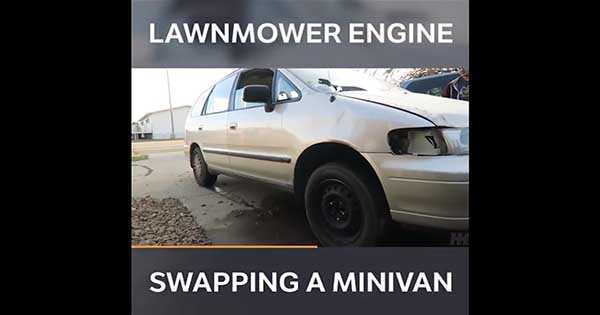 Couples of young guys were motivated enough to take out the engine from this Honda minivan and instead of putting it back again the same one; they placed a mower engine inside. But, nothing would have been so cool and mind blowing if they had not actually made the car run on that engine. Namely, they fully connected and wired everything up to make it work.

When the engine is first powered up, it works like a charm and nothing seems wrong about it. They even placed a shifter that can be used to shift through the gears. To prove that this is not actually a hoax and that the minivan is actually functional they drive it for couple of minutes around the block. To everyone`s shock and disbelief, the mower engine actually sounds perfect, keeping in mind that it actually works and does what it is supposed to do, just like a normal car engine.

What do you think about it? At last, here are the best lawnmower reviews for 2017!

This has to be the best engine swap of 2017 so far 😂Credit to boostedboiz, check out the full vid here: http://bit.ly/2zGr9BL