Mini and Rolls Royce are subsidiaries of BMW. However, even though they are owned by the same company which is BMW, the two renowned British brands are not known to cross paths. That was until now. A company out of Texas that goes by the name of BMP Design has done the unimaginable. They have squeezed a Rolls-Royce 250-C20B Allison jet engine from a helicopter in a MINI Cooper S. This is definitely one of the most unusual car builds we have ever encountered. Imagine the feeling driving a small Mini Cooper car with a massive helicopter engine right behind your front seats. Nevertheless, the consequences of such a build are easy to assume. 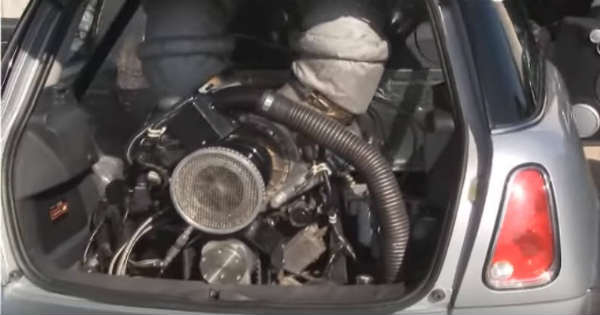 This small Mini Cooper car now delivers staggering 420HP. The rear wheels are driven through a RR engine that delivers 400 ft-lb of torque power. This turns the Mini Cooper S into a 4WD demon! However, driving this little car is no easy task. The driver needs to possess the knowledge to balance the standard controls with the special levers that operate the jet engine.

However, even though the title of this video insinuates that this car has 640HP, the guy demonstrating the car clearly says 420HP. Nevertheless, the acceleration and the speed of this small rocket are mind-blowing. The sound that the turbine engine is delivering is monstrous as well.

What would a Boeing Jet Engine look on a Go Kart? Don`t imagine it – see it!