Even though we have previously seen some amazing videos of super fast cars and mighty bikes, they never fail to impress us and we cannot wait to see something new and exciting. Hereby in this video we check two amazing, fast and mighty bikes i.e. the Kawasaki H2 with whooping 400 HP and the GTR – Nitrous Hayabusa with staggering 1300 HP. They are going for a fun time on the streets and indeed, these powerful bikes do look amazing. Even though it is night time and we do not see much appearance-wise, it is surely great to see such fast bikes rolling across the speed. 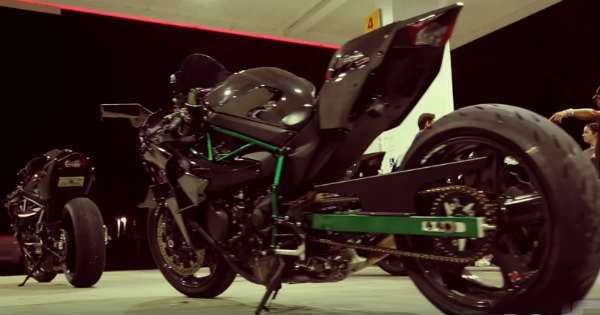 Moreover, we see couple of other bikes rolling across with them. Though they had one accident in which one of the bike`s engines blew up, everyone else was fine. But the best part about this video is the race between the Kawasaki H2 and the GTR – Nitrous Hayabusa. Everyone else is super excited about it and we get to see some awesome footage from the street race. They go at whooping 214 mp/h, which is surprisingly fast enough for a street race knowing that there are other cars on the road and they might endanger someone else`s life.

If you are looking for some good and quality time of fast and mighty bikes, these 10 minutes are guaranteed to fully satisfy your needs. What do you think, which bike is better appearance-wise and which one is better in terms of the speed and power?