When you desperately want to have a Rolls Royce Phantom, but you don`t have anywhere near the money to get it and you only have your own car, you can do what this guy in Kenya did – do a Mercedes Benz conversion to a Rolls Royce. Apparently, a guy and a car dealership called Sheikh Motors from Kenya decided to take his old Mercedes Benz and slowly but surely reshape it into the much more expensive and modern Rolls Royce Phantom. A lot of people in the comments are saying that this is photoshop, but I think you should still have a look and make a decision on your own. 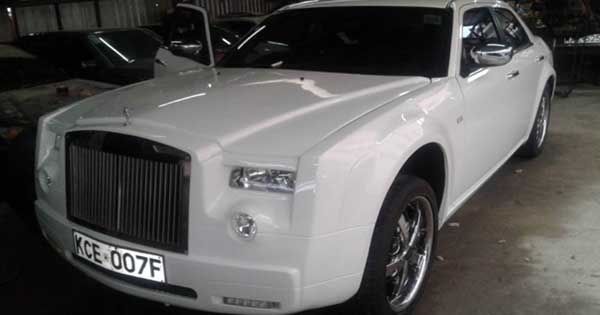 After all, even if this is a commercial for that dealership, it`s still pretty impressive. Anyway, this Mercedes Benz conversion ended in appalling success, apparently. The guy who tried to get his car to look like a Phantom succeeded, and bit by bit replaced part by part of the car`s exterior until it looked just like a white Rolls Royce.

Apparently, the process took over six months to complete, but if this is true and a car with a Mercedes Benz interior and mechanics and a Rolls Royce Phantom exterior actually does exist, this is really impressive and this guy has a lot to teach to other people. Some see this Mercedes Benz conversion thing to be just a sham, others think it`s a desperate attempt to look or get rich quickly – what do you think, is it real or is it fake?

Finally, how to convert cars into electric models? Find out here!