Being a stuntman these days is a difficult job hence people seek for more extreme ways to amaze the audience in order not to get bored by watching the same stunts over and over again, and such was the case with this man who jumped off a massive ramp while being inside a power wheels toy. Though it sounds absolutely insane, this guy managed to pull off a stunt no one has ever done before. There is huge number of people watching him from the stands as he is getting ready to amaze everyone. 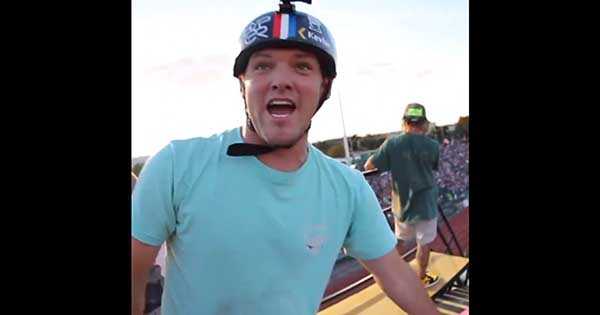 He is nervous though, but that will not stop him from making this jump. The ramp is huge and only the bravest stuntmen would dare to get inside a power wheels toy and perform it.

As he gets inside the toy car, the crowd goes absolutely crazy and everyone is anticipating for the jump. Then all of a sudden, he pushes himself down the ramp. He manages to rush down at a straight line. There is also a GoPro camera mounted on his helmet in order to catch the action. The jump itself looks absolutely awesome and he manages to land just about right, before his power wheels toy sliding off to the left. This caused him to fall out, but it was nothing serious and he managed to pull off an amazing stunt. The crowd went nuts and was absolutely amazed. What do you think, would you ever dare to get inside such toy car and perform this jump?