We have read some amazing and unbelievable stories lately and we have also seen some amazing videos. Most of them have been extraordinary, some of them taught us a valuable lesson but just few made us cry. Hereby we present you the McLaren P1 that is guaranteed to make you cry the same moment you see it. The McLaren P1 is a very special car and is extremely rare, and thus being rare means that it is super expensive to purchase one. Only 375 such cars have been ever made but this specific one has been involved in a serious disaster. It’s hard to see a McLaren P1 Burning in flames… 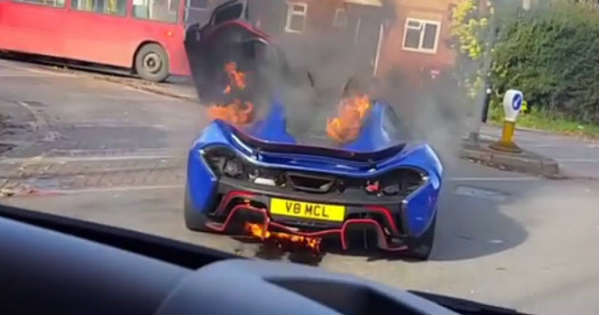 It was spotted on the Poyle Road in Colnbrook that is located near Slough. But you are all wondering just what had happened to this glorious and extraordinary beautiful machine? Well, the McLaren P1 is seen being caught on fire and burning down. The firemen had not arrived yet and even if they did, the car was already destroyed.

We do not know the exact reason why this had happened but we can only assume that it was due to the fuel leak somewhere in the car. The car was simply standing in the middle of the road and burning from the inside out. Luckily the owner of the McLaren P1 was uninjured but his car is going to end up somewhere on a junkyard.

What do you think, what could have possible been the reason of this extremely rare McLaren P1 burning in flames?