Watching a fail compilation videos is always fun, but watching expensive cars being destroyed can be very painful and disturbing and that is the reason why we take a look at the following video in which we see a McLaren crash and then pulled out from the bushes in this parking lot. But how on earth could such expensive car end up in the bush? 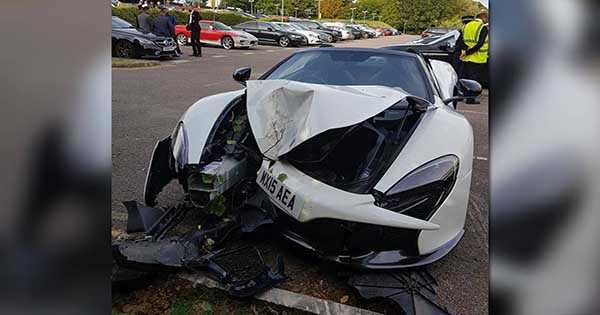 Knowing the fact that his car is one of the most expensive ones on the market now makes this video even more painful to watch. Supposedly, a launch control failure caused the car to lose control and eventually end up in the bushes besides the parking lot. Dozens of people came in near to take a look at this accident on the wedding day and very shortly help arrived. But they had to take out the car slowly.

A big SUV came in for help. They attached a big and strong rope on the back of the SUV on one end, and on the rear wheel of the McLaren on the other end. Then, inch by inch and very carefully they started pulling the car. Lots of the people gathered hoped in for help but they could not do anything except to watch the McLaren being pulled. Couple of minutes later they managed to take out the car from the bush and check the whole car for any damage. It is so sad to see this McLaren car pulled from the bush and all of this due to the launch control failure. Check the video for more!