Having read some literary mindboggling stories of people doing some really dumb things, you would certainly think that nothing can surprise you anymore, which is until you hear this Watsons Bay story. Hereby, we check out this hilarious story of a middle-aged man taking his expensive Maserati and using it as a golf buggy. But this story would not have been that exciting if he used the car just on the golf course, hence you can expect anything from a man who has much money. That is why this story has a little twist to it, something that you could not expect to see. 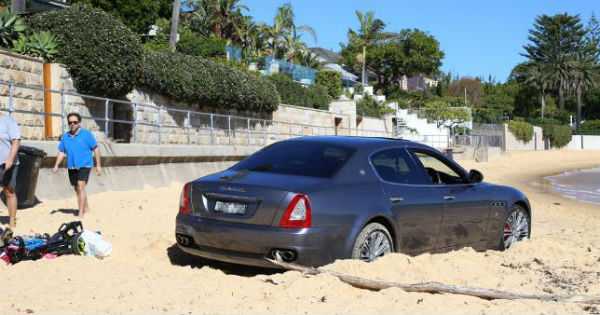 Namely, this gentleman was playing golf on a beautiful sunny day at the sandy beach but he made one huge mistake! He drove his expensive Maserati into the sand when it immediately got stuck. There were dozens of witnesses who were taking pictures from this awesome sight and soon after, the police had arrived. They immediately started questioning the man about what had happened. Many say that the expensive Maserati was very loud and it disturbed the people over at Watsons Bay.

A tow truck had to be called to help the Maserati get out from the sand. In one video from a witness, the owner can be seen playing golf while his car stands stuck at the sand just besides him. His car was taken away and he got inside an ambulance car for a quick check. What do you think, what made him do this?

However, if you need a golf push cart, read these reviews first!