The LNWR Heritage Company aims to maintain and preserve steam locomotives for fun and education. They have in possession six mainline heritage locomotives that run on steam and they are also responsible for their wellbeing. These steam locomotives have their origins from the British Railways and the Big Four companies. These historic locomotives are: King Edward I, Royal Scot, Holland America Line, Blue Peter, Port Line and Britannia. They work together with the great Royal Scot Trust and play a key role when it comes to ensuring that UK`s railway heritage is properly preserved for the upcoming generations. 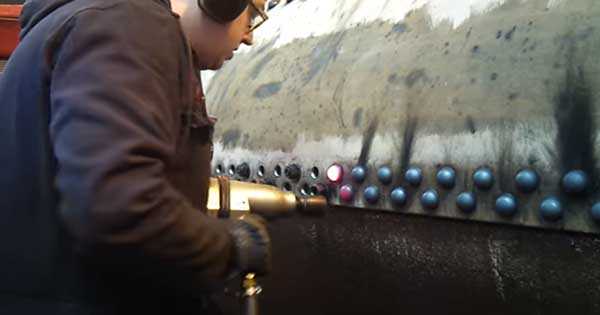 In this one, the laborers of this company goes to show us how riveting is really done. With the things they are doing in this video, they go to prove that some laborers earn their paycheck and probably deserve a raise as well. The laborers of the LNWR Heritage Company are getting various metals extremely hot just after putting some holes in them and then they cool the metals off.

They do this in order to ensure that everything holds together tight and nice with hot rivets. Now, this might look like a job that can get monotonous after some time. However, we have to give big props to the workers of this company because it`s a very important job that doesn`t look easy as well. You`ll literally start to sweat when you see them pounding those rives into place.

Riveting is not a job that requires too much heavy lifting. However, it`s a job that is physically draining nevertheless. Finally, visit LNWR Heritage Company`s official website!