When you think about the Pyramids, you probably ask yourself about the lifting techniques that the Egyptians used to lift all of those heavy stone blocks. 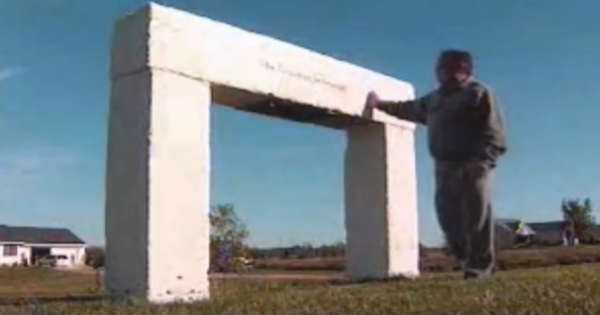 The truth is, they used a well-developed system of pulleys, wood rollers, smaller rocks as well as counterweights to get the job done. It wasn`t easy but with the correct technique and their strong devotion, they accomplished their goals. This guy in Michigan decided he wanted to uncover some of the ancient secrets and after a lot of trial and error, he finally came up with a system he could use to lift any size rock and move it practically anywhere.

This method was also used in the construction of the legendary Stonehenge, which has puzzled historians for years.
Anyway, this guy uses the ancient lifting techniques that he has re-discovered to stand a 20 ton concrete block by himself, without any machinery. The way he does this is he balances the block on a few rocks in the middle and then rocks it back and forth, adding a plank on the open side every time there is open space.

With this technique, he succeeded in lifting the 20 ton block 3 feet up in the air, but that`s not everything. He also succeeds in lifting the block vertically by washing the sand out from underneath the block, which then creates more space for the block to comply with gravity and have its heavy side go down even further. The strength of human intelligence is wondrous.

At last, check out the heaviest weight ever lifted by a man.