Now, the Ferrari F1 V12 might not be the best out of the team from Maranello. We personally think that the most successful engines the Italian manufacturer had was actually an inline four. However, this right here is definitely no joke and the monstrous scream it delivers can definitely attest to that. Having said this, turn up the volume on your speakers and enjoy the awesome sound this screaming engine produces. The way the sound manages to collapse over itself makes this sound engine very hard to describe with words alone. 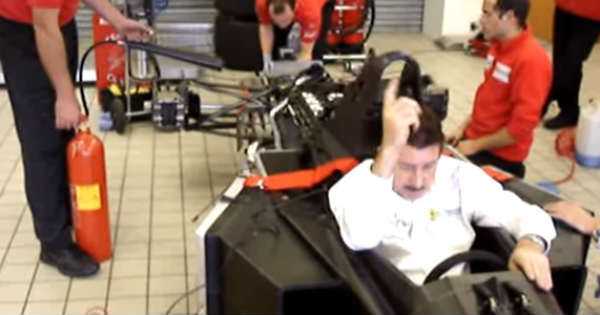 One moment the engine sounds like an animal. The next moment it sounds recognizably mechanical and beautiful. However, when the revs climb so high like triple what an average road car produces, the engine sound is like from a different dimension. This Ferrari F1 V12 engine creates a sound produced by 3.5Ls that are spread across twelve combustion chambers that are operating at 15,000 revolutions per minute. This here folks is beyond our human senses. This sound here touches the infinite. Unfortunately, the screaming sounds of Formula 1 are no longer with us when hybrid V6 engines were introduced in 2014.

The last screaming sound in F1 was delivered by a V8 engine that produced 700-800HP. The engine shown in this video was raced by four-time F1 World Champion – Alain Prost. This engine test is done after an engine change was done to the chassis. Turbochargers were banned back then so what you hear in the video below is a naturally aspirated 3.5L. This engine here definitely deserves at least a round of applause.

And if you want to continue listening to this kind of music, then follow this link!