There are many exciting races we have seen lately against cars that do not fit into each other`s category. But we all know that it is not about who won the race, hence we care about having some great fun time. This time we check out something that most of us have been waiting for, a duel head to head unlike any other you have seen so far. There are two racing categories that are regarded as the fastest in the world, the F1 car and NASCAR. Their fans had never ending discussion against one another about whose cars were faster. Here is the Formula 1 vs NASCAR drag race in Switzerland. 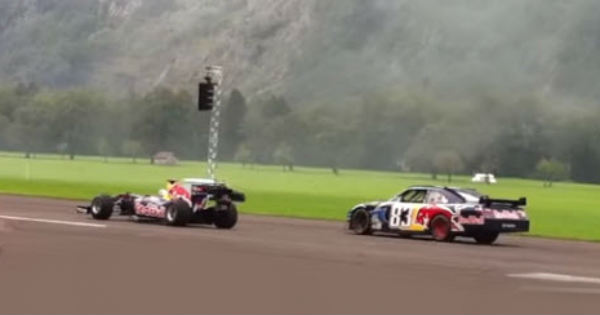 It was time to put this never ending dilemma to the test and see who the winner will be. Namely, Red Bull organized an event n Switzerland to have a little bit of fun. It was called the Red Bull Race Day and was held at the Airfield Mollis. Many awesome cars took part in it, but two in particular grabbed the fans` attention.

Namely, it was for the real deal, for the race that is going to prove something. Just as the two contestants, the F1 car and the NASCAR prepared themselves on the track, the lights went green. Both of the cars went flying across the track, but it was more than obvious that the F1 car was the faster car by far.

The NASCAR one simply did not have any chance against this mighty beast. What do you think about this Formula 1 vs NASCAR drag race, did you expect this outcome?