Over the years we have heard some utterly unbelievable stories when it comes to famous and rich couples getting divorced or simply breaking up. The Hollywood is the place where such stories are most common but what you are about to read next is something hard-to-believe too! Namely, this rich banker dumped his girlfriend but instantly regretted his decision. He owned a super expensive car, he broke up with her and then she took the car and drove it straight into the swimming pool. Believe it or not this is what this jilted girlfriend did… 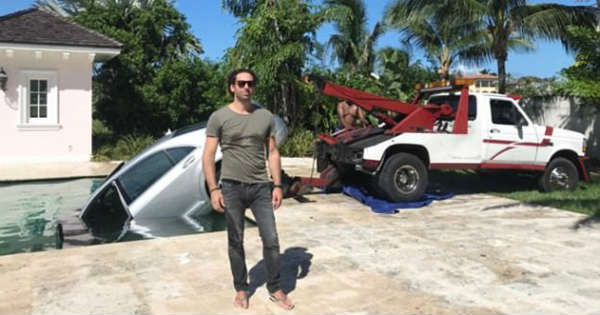 Kristina Kuchma, who was his girlfriend, comes from Russia and is 24 years old. After 4 years of having a great relationship, Guy Gentile decided that it was a time for a change so he broke up with her. This came in like a shock to her hence she planned that this Wall Street banker is going to finance her business, but instead she got dumped. She could have not think of a better way to get her revenge on him but to take his $100,000 car and drive it straight into the pool.

Once Guy found out he immediately called for a service that could get his car out of the pool. It took hours and hours to get this Mercedes out from there and we can just hope that it is going to remain in use or otherwise, he will have to throw away this super expensive car.

What do you think, what had happened with the car after this jilted girlfriend drooped it in the pool?