This 1985 Camaro Z28 IROC is barely touched. What a find! Don`t you just love the barn find phenomenon? Did you know that America is know all around the world for this? Yes, that is true. People all around the world keep talking about Amrican finding cool cars in abandoned barns such as a 1985 Camaro Z28 and a 1970 RoadRunner from this video! This culture thing really fascinates us and we find it cool! However, the video we are about to present to you is a bit different than the other barn find videos we`ve posted. 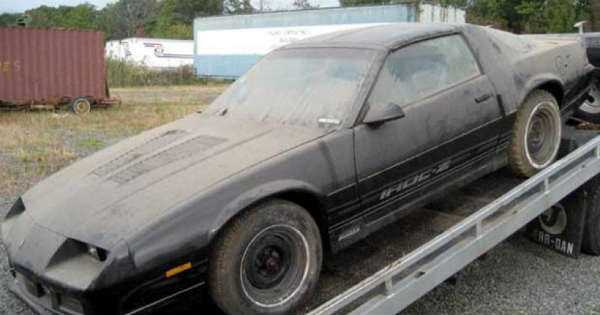 The 1985 Camaro Z28 is not an old chassis which can only be used for a project or a build. This one is BRAND NEW and barely touched! It even has the label on it! The 1970 RoadRunner is a bit different story, but it is in great condition non the less! This absolutely awesome  BRAND NEW 1985 Camaro Z28 Sport Coupe was found in an abandoned semi trailer, that was even that even had no locks on it! This beauty was found inside together with some old 1970 RoadRunner under a blanket of dust!

As can be seen on the video the Chevy Camaro Z28 has still the original window sticker on the window and the dealership wrapping on the steering wheel and the seats. The guys were pretty excited in the video. And how could not they be? They found a gold mine inside a trailer of a semi truck! We tell you, we have seen thousands of barn finds over the years! Some had up to 200 classic cars, some were worth millions! But, there is something special in this one that takes the breath away from many car enthusiasts!

If you are looking for some barn finds go to this great website HERE! Talk about awesome barn find here! What car would you choose from those 2?