I think that most of you know well that we should not believe everything that we see on the Internet, as there are so many totally crazy things, but yet dubious when it comes to whether to believe it or not, so it is hard to tell the truth sometimes. And when we are talking about Russia and Russian videos, I think that it would be safe to say that it is a `special category`. How about this legs workout in Russia? 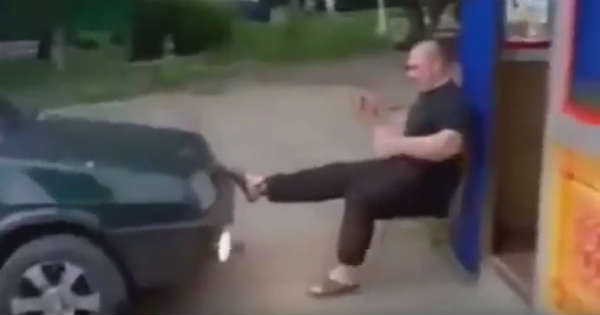 By now, we have seen some crazy looking things that are coming from Russia, it is almost impossible not to become (at least) intrigued when you stumble upon something totally insane and out of the ordinary. But as I said before, not all things are real, no matter how they may appear at the beginning.

The following video clip that we have chosen for this article could very well be a prime example of everything above mentioned. There is a big, and obviously strong guy, who is sitting on a chair, with his legs stretched up front, stopping a bucking car that even starts making clouds of smoke from all that effort to run him over! If this is true, then this man has the strongest legs in the world. But I will leave it to you to decide for yourself whether this could really be possible. It is actually some old Russian trick!