When you have an Audi R8 V10, it`s probably a beast that makes a hell of a sound. That`s what got this grandma scared as her nephew asked for her help in determining if there was anything wrong with his spoiler. 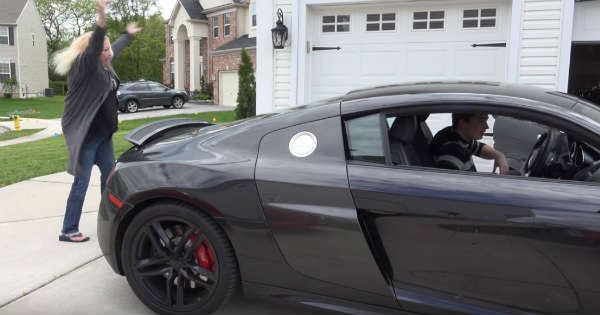 He asks her to keep an eye on the spoiler while he moves it up and down from inside the car and of course, she does it without second thought. The spoiler moves up and down a few times, but according to the nephew, it gets stuck when it is supposed to go down. That`s when he asks his grandma to lean in and take a closer look at the spoiler to see if there`s anything jammed between it and the trunk that could be stopping the spoiler from working properly.

As soon as she does though, this guy revs up his Audi R8 as much as he can, and it produces a sound like no other! The scared grandma jumps backwards but then proceeds to get her revenge by teaching her nephew a lesson in kickboxing, which he doesn`t find so fun.

Oh well, fun times. I just hope he`s able to do more of these videos before she figures it out!

However, grandmas are capable of a prank or two. Check out this classic bottle prank!