The mid-engine Corvette is one of the favorite topics in the automotive community and the rumor is fired up like never before. According to sources, the C8 Corvette featuring a mid-engine design should be the most revolutionary version of the sports vehicle ever. To begin, the 2019 C8 Corvette should become a real global car. 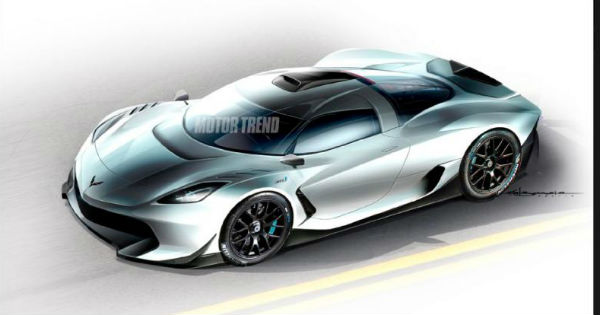 It`s rumored that GM will produce both left –and right-hand drive variants. Rumors tell that 2019 will start with 3 or possibly 4 models and the top one should be the “Zora.” Rumor also has it that the Zora should deliver 1500HP! This means that GM will take the fight to the Lambos and Ferraris. The Zora is expected to debut at the Detroit Car Show in January, 18. Nevertheless, there should be a base 2019 C8 Corvette as well and is rumored to come with a 502 HP small-block V8 engine. Nevertheless, the base C8 should feature the latest aerodynamic and lightweight technology.

It looks like shaving weight is a pretty high priority in order to make the car the fastest, quickest iteration ever. Interestingly, there are also rumors that the small-block V8 should have the OHV configuration.

However, we beg to differ. Everything is possible though. While the mid-engine Corvette idea is probably the worst kept secret in the automotive industry right now, we will let the rumors keep on churning till we have truly concrete information.

Finally, read more about the cheapest mid-engine cars you can buy today!