The hobby of RC anything can get pretty expensive just with updates and upkeep. When damage occurs, the hobby tends to get extremely expensive. In this video, we watch a gigantic turbine RC aircraft in which a lot of money and sweat has been invested meeting its demise in mere seconds. 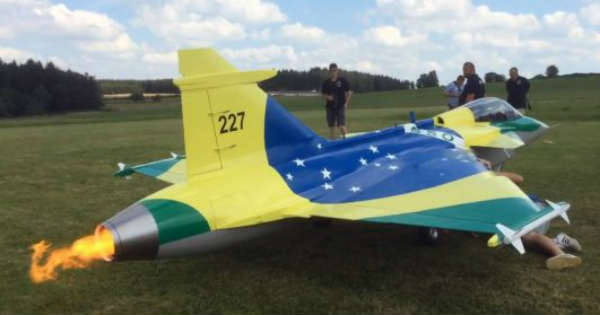 It`s a 1:2 Scale model Saab Gripen fighter jet made by Frank Schroeder. It is 279.53 inch long and weighing staggering 260.15 pounds! It`s really a marvelous RC build and the biggest we have seen so far as well. However, nothing is completely perfect including this glorious machine.

The incident occurred at a German RC event and the audience was completely stunned. While the gigantic turbine RC aircraft loops around, it suddenly loses a fin.

This made the aircraft to veer in a different direction and annihilating itself into a million little pieces. Fortunately, all those parts didn`t end up in the crowd below. Someone could`ve gotten hurt.

You can also see the builders of the plane completely devastated by the unexpected carnage. Oh well, at least there wasn`t a pilot to worry about. We also hope that this plane is going to be rebuild and will make a powerful comeback.