Formula Two is the feeder series of Formula One where youngsters are racing each other and constantly developing with the hopes of being noticed by the big Formula One teams and become F1 drivers. Here we have one very talented Formula Two racer! 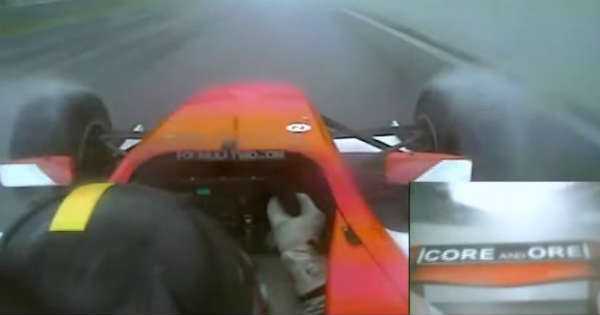 However, the skills of these youngsters should not be underestimated as some of them deliver amazing racing performance. Their reflexes and reaction skills are one of the best in the world and is calculated as lighting fast. This is perfectly shown in the video below where one Formula Two racer had the opportunity to show what it takes during an exceptionally wet race at the legendary Spa-Francorchamps that`s being held in Belgium. You can see the driver going relatively easy through the legendary corner named Eau Rouge.

However, after Eau Rogue comes the straight section of the track where the blinding rain proved to be a menace to race in. While driving on the straight and being blinded by rain, this driver suddenly encountered a pack of cars who were braking heavily or even stopping in order to avoid crashing into another vehicle.

The driver in this video was driving pretty fast under heavy conditions and when the vehicles emerged from the heavy blinding rain, he had to react staggeringly fast in order to avoid crashing in one of the vehicles.

In that extremely short time, the driver hit the brakes, turned left, went opposite lock in order to escape the grass and then returned his vehicle back on track while avoiding the wall and the other cars as well. We hope this Formula Two racer will get his chance to race in Formula One sometime in the near future.

At last, here is one interesting article on why Formula 1 drivers relearn how to drive.