According to one posting we have found, 2 prototypes of the Ford Mustang 1968 BREAK SPORT WAGON was built, 1 was built for WJ advertising agency and 1 by Bob Hoshiko (a California car restorer). They were eventually presented to Style Chief Eugene Bordinat, who was incensed by any idea of an outside proposal. Ford also had a design on the table. Eventually all 3 ideas were rejected. 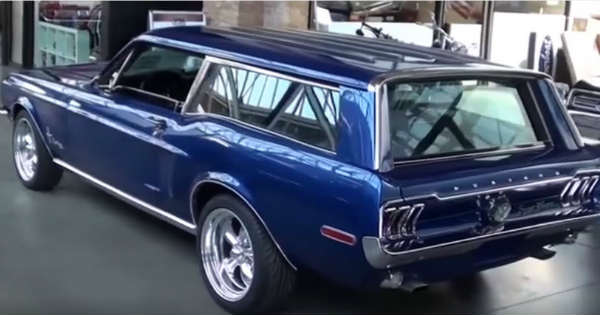 I have also found another posting describing as many others have cited -- The factory Ford Mustang wagon is a fabled creation. The story goes that in 1966 Italian coach builder Intermeccanica built a Mustang station wagon for advertiser Barney Clark and designer Bob Cumberford which showed up in many car magazines of the day.

The Ford Mustang 1968 BREAK SPORT WAGON is really a nice car and I would definitely drive it in a heartbeat. This would be great car for the E code 390 notch back.

We have also read that in the 60’s some guy in California made of fiberglass kit for the ’65 and ’66 Mustang then you could purchase and convert your car into a station wagon mustang in of court on but it was available to purchase . There are still some kids around somewhere…

When building a custom Mustang, you have to pay attention to the right rims and tires. Find the right size at TireWheelGuide.com