When it comes to speed and power, we all love trying new things and putting various cars to the test against each other, to compare them and see which one is going to perform better. One way to do that is organizing a drag race. In addition, owning an extremely rare and expensive car is everyone`s dream, but the reality is somewhat different and many of us can’t actually afford one. Hereby, if you are looking for a much cheaper option but you would still want to feel what speed and power really are, make sure to take a look at this following video in which we put to the test three super powerful cars. 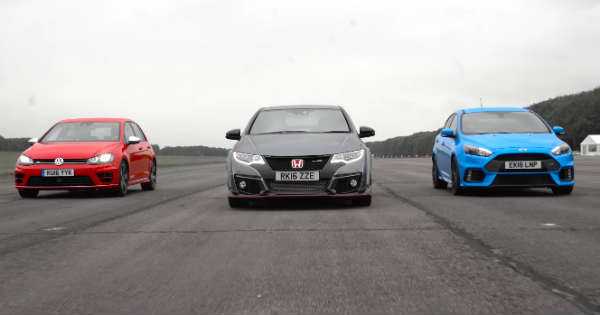 The cars you are about to see in this video, which go head to head against one another in a drag race, are the Ford Focus RS, the mighty Honda Civic Type R and the one and only Volkswagen Golf R. Before the drag race begins, we need to take a look at some of the numbers. The Ford Focus RS has got a 2.3L turbocharged engine with whooping 350 HP and it is an AWD. The VW Golf R also has an AWD and it is at about the same price as the Honda, but it has a 2.0L turbocharged engine and it is able to produce 300 HP.

Just like the Golf, the Honda Civic Type R has the same 2.0L turbocharged engine with 310 HP, but it is only FWD. If you want to see more and see how the race looks like and who the winner is, make sure to check out the full video!

At last, if you want to read more critiques on these cars, plus the Leon Cupra, follow this link!