Watching a fail compilation of any sort is always fun and they are getting more and more popular each year due to the fact that everyone has access to a camera now. But as most of you know, these fails can get pretty painful at times and moreover, you can injure somebody else. In this video we take a look at how engine block explosion looks like. Most of you are probably familiar and know how it looks like for a rod to be thrown hence it is fairly common. 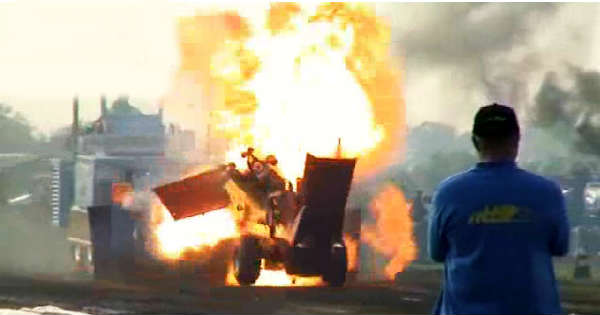 But this blow is something way more different and way more powerful. This engine block explosion took place back in May, 2008 on the European Maid – Made. This super powerful tractor weighs 3500kg and was seen preparing itself for the race.

Namely, this was a competition similar to a drag race, with the difference being that instead of cars, tractors race and they do it on the dirt track instead of the asphalt. But once the tractor was up and running somewhere in the middle of the race a loud bang was heard. Moreover, the bang was followed by a big cloud of fire. Everyone at the audience was shocked. The engine block simply flew out from the engine itself and fell on the ground. People rushed in for a help and luckily the driver was fine. By the end of the video we get to see footage from how the engine looks after the explosion. Have you ever seen such accident?