Jeff is a guy who managed to build his dream Porsche 911 in his shed! He`s an Australian gearhead who managed to build his dream car in just 18 months without any help whatsoever. He`s a guy who has worked on many projects before and films himself working. In this video, he rebuilds the car in a four minute montage. You can literally see months and months of work showcased in four minutes. He completely fixes the exterior which definitely takes a massive amount of skill. However, our favorite portion is when he takes to the great interior. 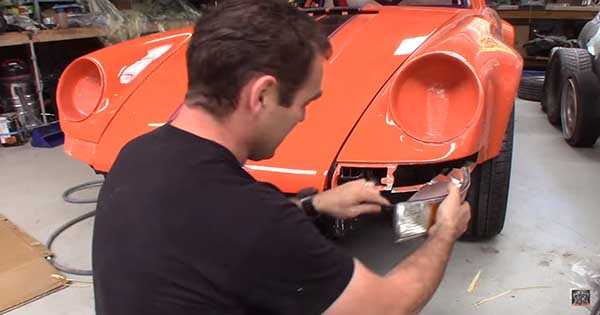 We also think this might be even harder than fixing the exterior. Just watching how he cuts the leather and fabric will give you a great amount of stress. However, while this dream Porsche 911 looks pretty insane by the end, he says that the car is not really drivable yet. The reason of this is because it lacks an engine. Hopefully, we`ll see Jeff getting there eventually, possibly in the not so distant future. This great car definitely belongs outside on the road now.

Nevertheless, while we can`t hear this car purr, it`s still awesome to see the effort and work this mad scientist has put into making his dream car. We can imagine the satisfaction this guy will have when his baby will finally hit the streets. We say he is a real mad scientist because practically no one can do advanced paint, upholstery, and body work. We are talking about completely different skills here.

If not in person, at least you can build your dream car online!