Every now and then an awesome videos pops out on social media that is absolutely stunning and hard to believe that is actually happening. Such videos offer us a chance for at least couple of minutes to forget about everything and dive into the world of speed and power. Namely, what you are about to see in this video is this Dodge Ram Cummins that seems to have no limit in terms to its abilities. Though we are very much used to watching or driving such mighty trucks, this one takes the game to a whole new level hence it demonstrates the reason why we regard it as such an awesome truck. 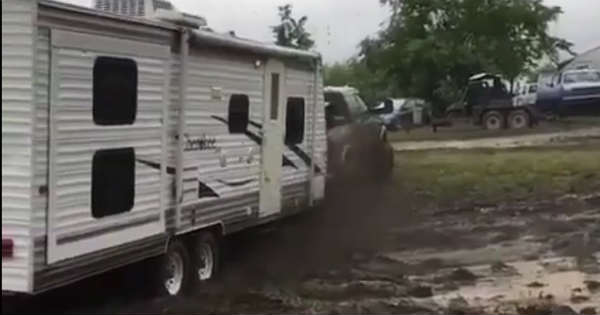 The video is fairly short and we take a look at a truck that has a trailer attached to the back. There is mud on the road he was supposed to go so he had two possibilities, either to make a turn and go other way round or to go through the mud with the risk of being stuck. The driver decides to go over the mud and at first it seems that he is going to do just fine but then all of a sudden, this mighty Dodge Ram Cummins gets stuck.

This is where we see the power of the truck in action. He pushes the gas pedal to the metal and those massive tires had just the right friction to get the truck and the trailer moving. What do you think, could this be the coolest crossing trough mud you have ever seen?