Check out this spectacular jump during a motorbike race by Dan Linfoot! 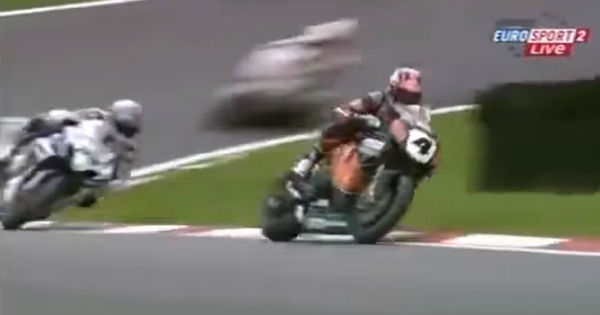 When it comes to bike fans all around the world, many will agree that the infamous Cadwell Park`s mountain race track is one of the most demanding. Having said that, it is also one of the most satisfying to race on. Racing on this track is a real art and it sends riders literally flying over the mountain. In this one, we have one example of a certain section of this track that will send shivers down your spine.

It shows what these motorcycle athletes are capable of. Dan Linfoot is the guy who makes a jump while flat out racing.

He is racing for Honda Racing with the model Honda CBR1000RR. He is also known as the guy who made a name for himself in MotoGP 250cc category. However, he has settled in the British Superbike Championship and by the looks of it he is having a great time.

The jump looks very spectacular, but it can also cost the rider a lot of time. This corner has an incline at 30 degree so riders can lose time of up to 0.2 seconds, which is a lot when racing.

However, with this jump that Dan Linfoot makes, he surely lost more. Nevertheless, he still managed to maintain the gap.

If you haven`t had enough, here is another video for you containing extra jump!