Thanks to its huge tires, this Cummins Diesel truck will get you unstuck from any kind of terrain. 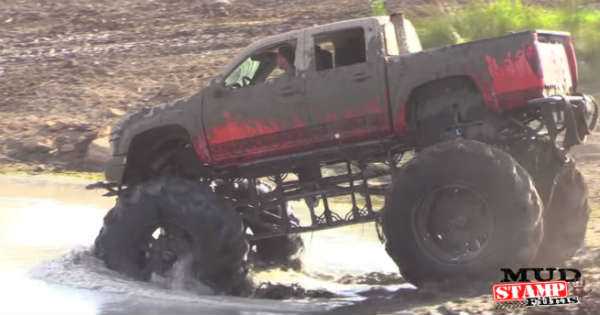 No matter how much we love those classic racing tires they might not be enough for what you are about to see in the following video i.e. this massive Cummins truck with its huge tires looks absolutely stunning. This looks like sort of an event or competition hence there are spectators and people filming. Namely, people gather up and bring their huge trucks, some of which are their own builds, and test them in a huge pile of mud.

The event is pretty straight forward, the trucks goal is not to stop inside the mud and all that can be achieved with huge tires! In the following video we this red Chevy Colorado truck, though most of it is covered in mud, how he manages to handle the mud.

It has a massive steel frame under the whole body of the truck as well as a gigantic suspension. And it manages to go through the mud with ease. It lifts its front part and using only his back two huge tires, it simply glides across the small mud pool.

There are people cheering, and it looks as if this was his first test in the mud hence everybody is very excited. What looks way cooler is the angles used to film these tests. There is a small camera mounted on its side and it gets splashed with muddy water as the truck drives. Imagine how cool would it be to drive in one.

What do you think, can anything stop this beast?

At last, check out the world’s biggest production tires.