This guy is somehow driving a completely wrecked Toyota Vios that we can`t stop but wonder, are there any paranormal activities involved here? The car looks like it`s on its way to Los Santos customs after managing to evade a five star wanted level on GTA. We know that Toyotas are enduring and robust machines, but we never expect it to be drivable after sustaining this much damage. This is some great marketing for the Japanese manufacturer. The entire video is recorded through a camera in a vehicle that is driving next to the wrecked car. At first, you`ll think the wrecked car is being towed. 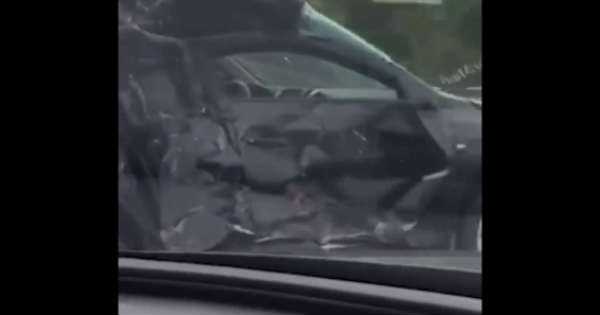 However, as the car from which the video is being recorded goes a bit further you`ll realize that there`s a guy inside perfectly operating the destroyed vehicle. We wonder though, what`s got to be the urgent reason for this guy to drive his completely wrecked Toyota like that? Because driving a destroyed car like that can`t be safe at all, he`s probably risking his life and other people`s lives by driving a car in that very poor condition.

Maybe he`s late for work and can`t risk being late? That would be hilarious indeed. For many motorists, a very minor car crash is more than enough to make them exit their vehicle and call towing service, but not for this guy. However, we wish someone could contact him and ask him a few questions because there are many things we want to find out. Check out the video below and witness how endurable this Toyota Vios actually is.

And last but not least, follow this link to give your condolences to the driver who destroyed his Ferrari 430 Scuderia just an hour after he had bought it!

So many questions, so little time 😶📹:James Chen