When Colin Furze was approached and asked to make the loudest exhaust mod in the world which costs less than a hundred pounds. He took to the challenge with a straight face and seriousness which is legendary of his behavior, and dove right into solving the challenge. He bought a Rover 75 and started work on it – keep in mind that he needed to make it louder than that other car, and boy did he succeed in this. He took to his shop and made a pipe going out of the bottom of the car – to the front, instead of to the back. 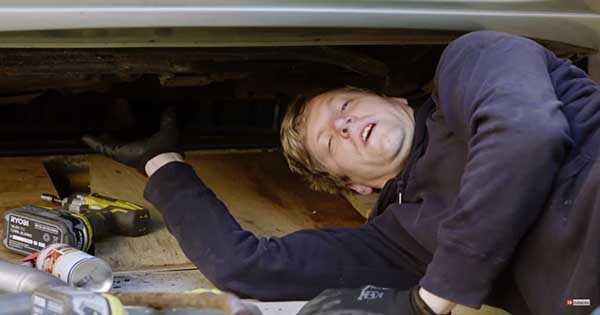 He made the pipe go over the entire hood, fully vertically all the way over the windshield and on the roof, towards the back of the car. Now, while this wouldn`t necessarily be the loudest exhaust mod in the world, Colin Furze believes it`s the loudest that costs under a hundred pounds, and seeing as we haven`t seen any evidence against that claim, why wouldn`t it be? You have no idea how loud this thing is, Mr. Furze even said that it would make deaf people deaf to a whole new level.

Its legendary strength and power is not only because of the pipe going over the car and to the back, but also because of the blowhorn attached to the end, making the entire contraption a Rover trombone! It looks ridiculous, it`s completely impractical, but the challenge is completed and Colin Furze has created the loudest, cheapest exhaust mod that we know of!

At last, here is a beginner`s guide on modifying your car!